While Hanno is primarily known for his performances in F3A back in the days when .60 engines were the rule, he also flew in the TOC (Tournament of Champions) in Las Vegas, winning everything there was to win for years on end. Attempts to alter the rules to allow others to win failed, he kept coming back with a vengeance. Always the tactician, when they introduced new rules offering bonus points to biplanes he brought a Super Skybolt biplane and was disqualified for mysterious reasons when it became obvious it would be another winning year for Hanno. 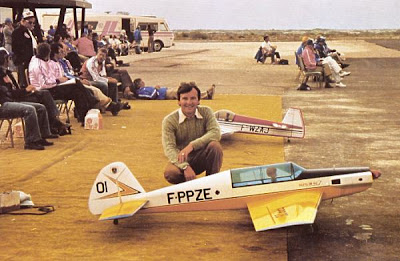 The most well known of his TOC entries is the giant Dalotel which was powered by two Super Tigre .90 engines connected together using a self-developed gear mechanism. The plane weighed 15 kilos and had enormous thrust, dwarfing glow-powered competitors and flying circles around the chainsaw powered planes. 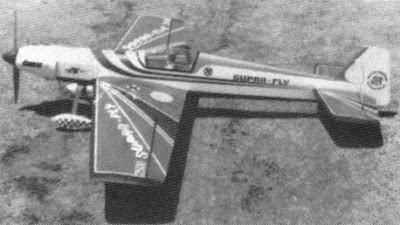 A big difference between Hanno and many other successful pilots is that he took showflying very seriously and developed planes and manouvers specifically for that purpose. The big super Tigre powered Calypso led the way for the famous 2,06 meter Supra Fly shown here. With 6,5 kilos weight and a piped ST 3000 for power it was a showstopping monster. The plans are available from VTH.de in Germany and it can easily be modified to fit todays 2-metre/5kg rule and would be a beauty with an O.S 1.60 in the nose.