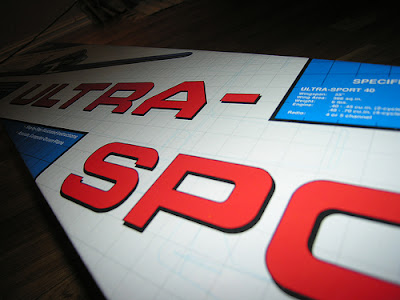 I built an Ultra Sport 40 when I was 16. It had an O.S 91 Surpass for power, featured trike gear and a gorgeous paint job. It was way to much to handle for a rookie pilot and after a few minutes of desparately trying to keep it airborne, all that was left of it was a crash site strewn with balsa. The left wing was in a million pieces, fuse cut in three parts, engine broken, receiver busted, servo gears stripped. My worst and most costly crash ever.

Broken, but not forgotten – the Ultra Sport has been in my mind since that horrible crash. I sold the plan and the parts to a friend who stored them for a few years, and then I bought it back a few years ago. I bought a canopy from Tower and thought that perhaps one day she’d fly again.
But it was not to be. When Great Planes relaunched a limited production run of the old kits I had to have the big-ass 60. It arrived today and I can’t help getting that old retro pattern feelin’!

I’m happy to report the kit is exactly the same as it was – die cut, heavy duty balsa and even the same crappy hardware. They didn’t even make it a two wing servo job, it’s still the original 1989 design right down to the expoxy and microballoons wingfillet. Hooray.

Engine? Weeeeell… I’m tempted to use the old 91 Surpass which has been in retirement for 15 years. But it can probably handle an ST91 I have lying around, or perhaps I should celebrate the old gal by giving her a new O.S .75 AX?
Time will tell. Pictures here