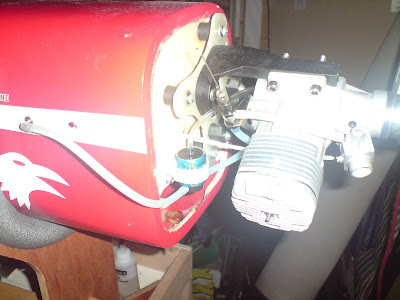 Here’s the updated plumbing on the 160 with the Perry pump installed. Pretty straightforward, so with hindsight I guess there was nothing to worry about but I’m also glad I’ve got experience of running it without a pump. Since the picture was taken I have added a Sullivan Crap-trap fuel filter between the tank and the pump. I replaced some fuel lines and made them more accessible, plugged the pressure tap in the pipe and routed the vent line to come out of the belly just behind the cowl. The tank has been repositioned on a new tank tray and the throttle servo moved forward for a straighter linkage.

It all worked very well, the engine ran happily at 7800 RPM with more to go on an APC 18×10 PN prop and idling at 2000 RPM (1500 possible but shaking a lot!). Initially I was not able to figure out the idle, I didn’t count on having to turn the low-speed needle a full two turns in, but that did the trick, the pump really does deliver great amounts of fuel and both needles required considerable adjustment to run with the new setup. So now all I have to do is fly.

Interestingly I had a bad case of hysteresis with the throttle setup. Idling at 1500 or so RPM, I ran it at full throttle and then it returned to 2500 when the throttle was retarded, giving a difference of 1000 RPM. I guess it’s a risk we take with soft-mounted engines. I have a digital servo on the throttle but that does not help – the servo will hold but the engine shakes in the other end, pulling the linkage and increasing the carb opening. I’ve even had a case of a plastic link jumping off an idling engine, it came to full power and there was nothing I could do to stop it. The plane roared into a fence, breaking a wing and barely missing my leg. Since then I respectfully and carefully install linkages in my models. But hysteresis is a big problem. I’d love to hear from readers who have experience (and perhaps solutions?) with this. Leave a comment and we can have a discussion.