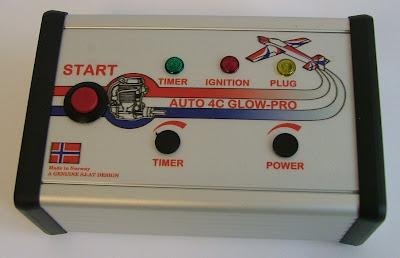 Have you ever primed the engine, connected the glow driver, flipped the prop only to have the &%¤%¤##%!! engine lock up, backfire, toss the glow clip, loosen the prop nut and generally misbehave? Of course you have. This is something we all live with. With 2-strokes ist just annoying but with 4-strokes it can be lethal. So when a friend of mine said he would make a glow driver that would end my troubles I was first in line. And what I received blew me away – this is THE mother of all glow drivers. I thought I was getting something homemade but this is a professional product. It’s called the Auto 4C Glow-Pro and is handmade by Audun Thinn and Sverre Johannesen, both seasoned pilots who know the demands of trying to start a psychotic 4-stroke while the judges are timing you. 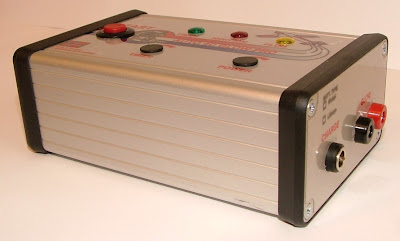 To start with, it has an extremely rugged aluminum case that feels as solid as it is. On the inside theres a print plate with all the electronics (and lots of it!) plus tree LEDs, two dials for adjusting timing and current and the on/off switch. Standard power is a 3-cell 2400 NiCd battery but you can fit just about any battery in there, even up to four cells. Typically you can recycle your old receiver batteries should have have some lying around ( I know I do). It will run on anything from 2 to 6 volts and any type of battery including LiIon and A123. It has 4mm banana plug out for the glow clip, and a 2,1mm plug for charging. This is the same as the plug you use to charge your transmitter so there’s no need to make a new plug.

Here’s how it works: Connect the glow clip, and the yellow LED glows to signal a good plug connection (no need to light the plug just to check if it works!). Then press the start button, spin the engine with the starter and the glow driver will delay the power to the plug as indicated by the green and red LEDs, giving the engine a soft start AFTER it has started spinning. Presto! No more burned plugs, backfiring engines and shamefully missed rounds in F3A. The timing and glow heat can be adjusted to suit your engine using the potmeters that you access from the front (covered by rubber seals to prevent dirt inside the case). Once set, you do not need to adjust them again. There is also an option to have it fitted with a buzzer at extra cost. The buzzer signals the end of the timing, it beeps when you start, when the timer is ready and signals glow power is on with a constant tone. I do recommend that since you often watch the prop and not the glow driver when you start. The buzzer

And the best part is: This limited production item is for sale. Get yours today! You will not be sorry. Contact Audun Thinn at audun.thinn@ingenium.no if you want to buy one. They have a limited number already produced but they will also make to order. The price is 1295,- NOK plus shipping. That includes a fully charged battery and the glow driver as shown in the picture.

The glow driver has been tested by all the top Norwegian and Swedish F3A pilots flying YS (and amateur-me with my OS 1.60) so we know it works – don’t take my word for it, buy one for yourself.