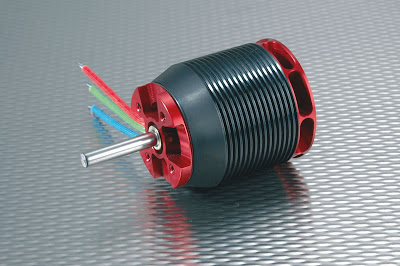 While the Lasers are stored away waiting for summer, my autumn project is finally underway. It’s an electric 50-size model called Mini Scalar from Peter Adolfs in Germany. It has a 164cm wingspan, glass fuse and bellypan and balsa sheeted foam surfaces. It is not so much a kit, you just get the glass and sheeted parts and off you go. No formers, templates or nothing. The wings are well made though, with plug in stuff ready made and tips, LE and TE are sanded perfectly. The plane has a removeable canopy and bellypan and is perfect for access to the internals. The goal is to have a user-friendly winter and F3A practice plane which can also serve as building practice. The fuselage will be spry painted and the wings covered, something I have not done in years.

It will be electric. (I may have said something about electrics in the past, words like “never” comes to mind but I belive in responding to change over following a plan) Power will come from a Hobby King 6S 4000mah LiPo, controlled by a Kontronik Jive 80 ESC. The can in front is a Kontronik KoraTop 20-14W as seen in the photo.

I chose the motor because it was recommended by my local pusher. I chose the version with the most RPM/v because I don’t want to swing the biggest props. The fuselage is not nearly as big as, say a Sebart Angel S 50, so I need more RPM on smaller props to avoid torque. I will enjoy experimenting with everything from 12×10 up to 14×10.

The Jive regulator is the best out there. But how can I say that, I have not tried it and I am no expert on electrics. Well, since it comes with an indestructo hard case which protects its extremely expensive innards, it’s the best regulator I can buy if you ask me! I can’t belive why other manufacturers does not do the same. The case is well designed and is even waterproof, although one can argue why when the rest of the setup (motor, battery, servos, receiver) most certainly is not. It has a very powerful BEC so I may not have to have a backup receiver battery, which saves weight. The Jive 80 is far more powerful than the 80 amps imply – sources say it outperforms regulators for F3A use with far higher advertised capacity. It’s just Kontronik being cautious. And you can add a heat sink to the metal surface of the regulator, increasing its potential so 10S use in 2-meter models is not a problem. And best of all? It has an F3A mode with adjustable motor braking for smooth downlines.

Based on experience from bigger models, Graupner servos will be used. DS8077 cheapies will control rudder and elevator, and C3041 minis go in the wings.

Build progress so far is u/c attached, battery compartment formers made and glued in, firewall under construction. Pictures will follow.