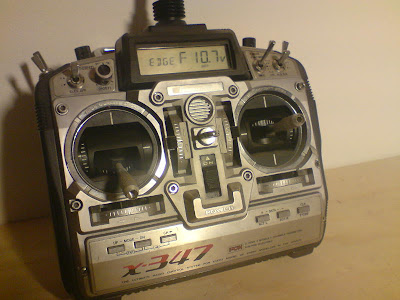 This radio was a christmas present given to me by my parents in 1991 and has seen extensive use. After being replaced by the MC-22 it has served as a backup radio. I planned to start using it again as an easy to carry indoor and small electrics radio when I noticed that the backup battery was empty, it deleted all settings each time it was turned off. That’s a bummer after you have just set up a model. The radio is worthless without backup battery so I started taking it apart and here’s how it went. 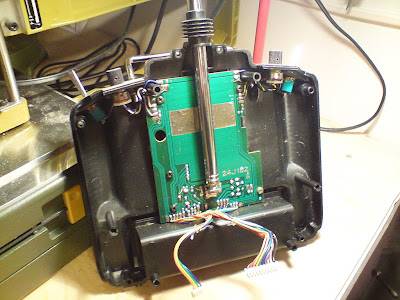 Removing the screws in the backplate and taking off the two main connectors between the transmitter module and the main circuitry leaves no clue as to where the battery is located. But I suspected it was attached to the main circuitry surrounding the display, so… 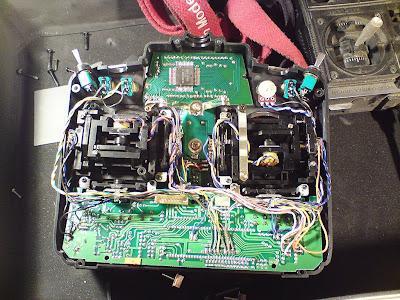 Removing the screw holding the main circuit board did not allow me to get it off so I had to remove all 8 screws that hold the stick assemblies in place to get some more clearance. 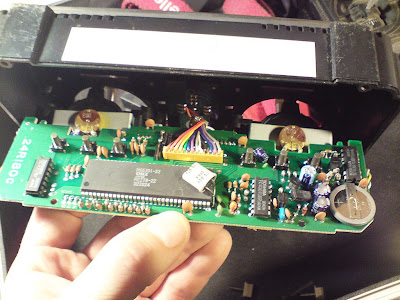 Turn the circuit board around, and voila! A very dead, almost 20 years old 3V lithium battery (CR2032). To my great surprise, the bastard battery was not meant to be replaced, it’s soldered to the battery clamps! I had to remove the battery clamps by de-soldering them from the circuit board (easy does it!) and then pry them off by force. The clamps survived and although not looking like a basket of fruit anymore, soldering on a new battery should pose not problems.  What thoroughly scares me though is getting the circuit board back in place, in front are 6 buttons with metal springs for the buttons in the front panel and you have to work blind while installing them.