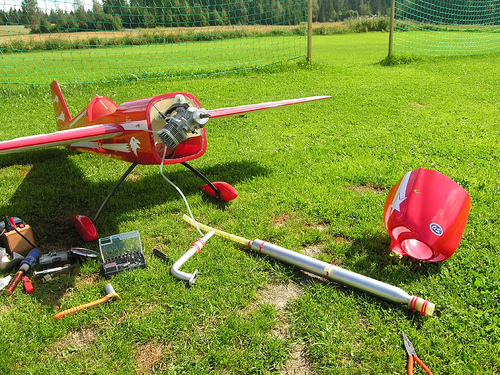 A tuned pipe can increase engine power dramatically while at the same time reducing noise. Sounds too good to be true, but it requires a good setup and a pipe that matches your engine. You’ll also have to take into account that fuel consumption will be a lot higher.

This is part three in a series of general advice on engines describing my experiences. These posts are intended for those who still think about engines as a complete mystery -things I wish someone had told me before I had to spend the time to find out for myself. (YS mechanics and engine doctors already know this.)

A good tuned pipe for your engine can be had from a variety of sources. Hatori have pipes that fit most engines and they are well worth the money. Just Engines in the UK sell some replicas at a lower price but higher weight. You also need to find a header to connect the pipe to the engine. It has to fit both the engine and the plane and it takes a bit of searching to find the right one.

Setting up the pipe and header requires a joiner between the header and pipe, this is usually a silicone coupler. If you buy Hatori header a suitable joint is supplied with it along with high quality clamps to make sure it doesn’t slip off the pipe. Use plastic strips to secure it if you do not have Hatori original clamps. To prevent it slipping off, sand the header and pipe to roughen up the surface where the silicon joiner is attached. 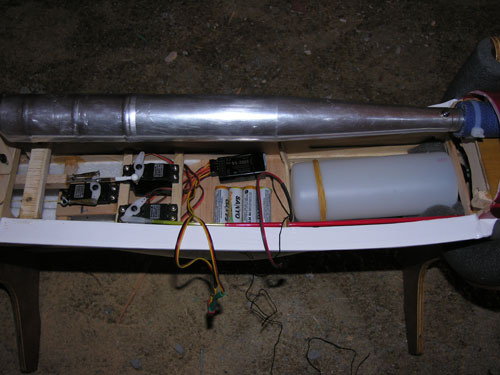 Tuning a pipe is fairly easy. The formula is simple, just start long and make it shorter until your rpm drops, then back up a bit… Well bite me. Nobody does that. it’s extremely time consuming and not worth the effort. It’s better to ask advice or to start at a point you think is right, you’re not that far off just plugging the pipe into the header, chances are you are spot on. If not, do what everyone else is doing, and if you’re using a Hatori setup, just plug it in, the header and pipe are matched up (as you can tell there are few reasons not to buy a Hatori header and pipe…). It differs of course due to rpm and prop combo, but not all that much.

Here’s how you know the pipe is either too short or too long: If it’s too long you’ll not have the power you expect. You’ll need to lean the engine max to make it run properly. There’s hardly any smoke coming out in flight, engine runs hot and you have blobs of burned oil coming out of the pipe on the ground. That never happens with a normal muffler. If it’s too short, the engine might be very powerful but it’ll run hard (you can hear it, it sounds terrible), it’ll burn plugs (one in 2-3 flights) and be a bit more noisy.

Be wary of some types of advice – many will tell you stories of how engines are “on the pipe” and claim that there is a very precise RPM where the engine exhaust hits the pipe baffle (or high point for pipes with no baffle), producing resonance for bang-bang superpower etc etc. Yes it does but that’s a kind of pipe you are not likely to encounter unless you’re into F1C, racing cars, Speedboats and the like. The kind of tuned pipes produced by Hatori, Greve etc with multiple baffles that are suitable for normal two-stroke glow engines in F3A-type aircraft do not do this. They are suitable for a much wider RPM range, making them easy to tune – just watch out for overly long and overly short pipe symptoms and you’ll be just fine somewhere in the middle.