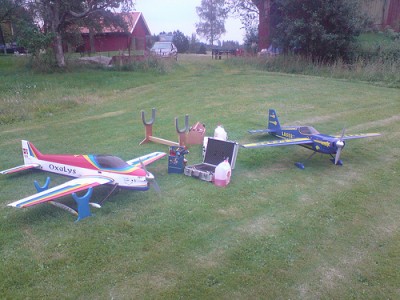 Although it happened a little while ago now, here’s the status on the blue Laser. It’s been fitted with a used YS 170DZ/Hatori combo and thanks to my buddy Audun it ran very smooth. I had three great flights at Auduns field and I was very pleasantly surprised to experience the immense braking effect on downlines with such a powerful engine. Fuel consumption… not so impressed 🙂 I have enough for a schedule but no more so I need to be careful. I’m very happy with the choice to standardize on YS engines. That’s Auduns Oxalys in the picture, the plane used to belong to Ola Fremming. Audun was unfortunate and broke his belly pan during a forced landing. Pictures here