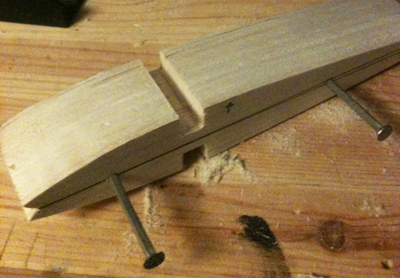 We’ve moved to a new house with a fairly large workshop in the basement. It’s taken a while to get things in order and planes have turned up that I didn’t even remember I had. Like why am I scratchbuilding a Goldberg Tiger 2 from plans when I have a Yoshioka Aladdin NIB that would have been more appropriate? Because I forgot that I had one. Oh well, done is done, wing ribs are cut for the Tiger already (see picture) so now I’ve got half a Tiger 2 on my workbench so the Aladdin must wait for a few more years. The idea with the Tiger 2 is to have a glow model for winter flying because the Kyosho Osmose electric was just to fiddly to assemble in cold weather, and the batteries didn’t like cold either.

I built and flew a Tiger 2 in 1994-1995 and I’ve always felt I had no closure with it, since it was shot down by an idiot heli-pilot on the same frequency while I was still getting to know the plane. No parts remain from the original but over the years I’ve kept the plans and collected bits and pieces. When I found a canopy in a Bangkok hobbystore 7 years ago the collection of parts was complete and I really had no more excuses not to build it again. And NOW, a mere 7 years after that I’ve actually started. It’s not hurry after all… An O.S. .55 AX will power the 2011-edition and it’ll use some bargain Hitec mini servos and leftover scraps that have collected in my parts drawer for years. UPDATE: Link to build pictures on Flickr