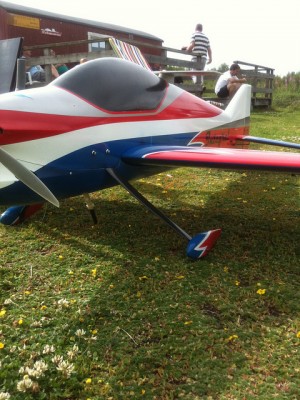 Here’s an update about what’s going on in the 2010 season. The integral is pictured here with a new undercarriage which was violently torn off minutes after the picture was taken.

The Integral is the best flying plane I’ve seen. I just love how it presents itself in the air and the color scheme is brilliant. The CDI engine is really easy to operate and is very fuel efficient. It’s also one less thing to charge before I go flying since there’s no glow driver involved.. I typically charge about 600 mAh after four flights in the combined RX and ignition battery pack. At the annual Løten F3A cup I experimented with my own blend of fuel with 10% oil. That definitely did not work well, it overheated in both rounds and stopped. After a forced landing the undercarriage mount was badly damaged and is currently being repaired. I have changed to the taller ZN landing gear that is used in their electric models like the Xigris. It looks really nice and gives better prop clearance so that I can run 19 inch props if I want to. I have had some hysteresis problems with the throttle servo which gives an unreliable idle so I’m changing the throttle servo position and will be using the Futaba 9650 servo. 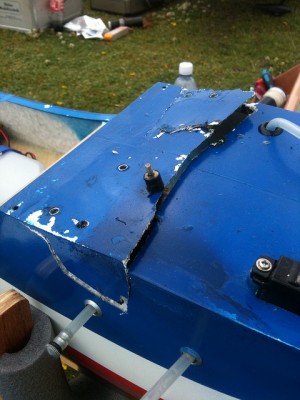 150 km/h into a wall of grass. Integral does not approve.

While the Integral is undergoing undercarriage surgery I have flown and trimmed the Lorenz Laser. It hasn’t flown since I broke an undercarriage leg last year and now has a stronger, lighter undercarriage and it’s converted to Futaba 2,4 ghz. Trimming it with the new radio and receiver should have been uneventful but it was rather terrifying when the elevator horn broke. Nothing raises your pulse like seeing your elevator flapping freely in an untrimmed plane. To top it off, a wheel fell just when I was touching down. I got some applause from rolling out perfectly with one wheel and one elevator. Every dog has it’s day! Upon inspection, the other elevator horn was fractured and broke off with a light twist. A light surgical procedure involving 5-minute epoxy later, the Laser flew two trim flights and one P-11 schedule successfully. 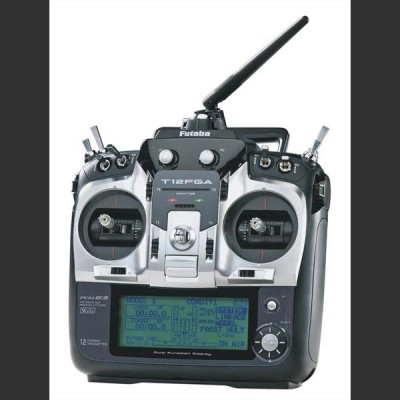 I have swapped the lovely little T8 Futaba radio for it’s bigger brother, the T12FG. It offers more programming ease with it’s larger screen and also has logical switches which I find very helpful for switching flight mode from normal to snap roll using stick positions. I also have a flight mode called “IGN ON” which powers on the ignition. It’s a non-standard flight mode which means the radio gives and alarm if switched on when the ignition switch is on. I have installed a 2800 mAh Robbe Li-Ion battery and updated it to firmware 2.1. It’s a superb radio but sadly it lacks the trim position reset feature and the superior ergonomics of the T8. And I really miss the backlit display, it’s almost impossible to see the screen in poor lighting conditions. It’s always nice to have an excuse to upgrade your radio if something better comes along…