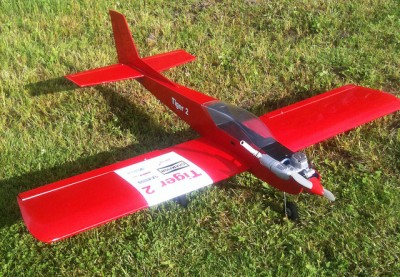 The Tiger 2 was flown for the first time today, and it was successful. I ran the engine for about a tank and a half on the ground, and after that it was well behaved. The O.S. .55 AX is the easiest engine I’ve come across. I just flipped the prop and it started just like that. It’s a bit noisy on an APC 11×7 prop, but it had great power after just a few tanks of fuel.

The project really started in 1993, when I crashed my original Tiger 2, built from a Goldberg kit. I really liked the plane, so I kept the drawings all these years. In 2004 I came across a canopy in a hobby store in Bangkok (!) and after we moved to a new house last fall, the canopy appeared, irresistable. I found the plans, did a quick sorting through of all the odd bits and pieces that were stashed away and found out I had about 90% of all the hardware I would need to complete it. So I started, not knowing what lay ahead!

I had most of the wood I needed lying around, and as a result the structure was heavily modified to suit the sizes of wood available to me. For example, the ailerons are a built up, sheeted construction. They weighed 11 grams each before covering. It’s 99% balsa, and I aimed to keep weight down as I built. The finished plane weighed in at 1900 grams ready to fly! It turned out nose heavy, so I replaced the LiPo RX battery I planned on using with a heavy 5-cell NiCd, and that sorted things out. It weighs 2 kgs dry with that battery. The plane doesn’t seem to mind, and vertical performance is really something.

The Tiger was 95% finished before christmas 2010, but in early 2011 I started building the Xigris in order to get that ready to fly in the 2011 season so the Tiger was put on hold. It was intended as a winter plane, so I thought it could wait until next winter. Then I got the urge again, and a couple of days of assembly was all that was required to make it airworthy.

When it flew today it was utterly un-spectacular, it just did it’s thing like it was supposed to, it obviously needed some trim and the engine isn’t performing 100% yet, but it felt great to chuck this thing about the sky. It almost makes me want to build one more, with a .72 O.S FS-a. Maybe in another 20 years?

Pictures from the project are here.