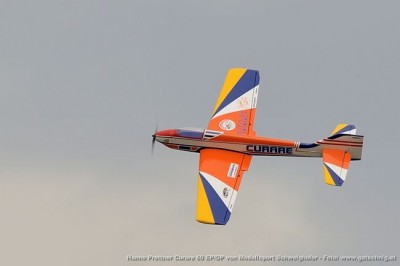 I am doing a review of the new Hanno Prettner Curare ARF for our magazine, and since that magazine is in Norwegian, I’ll also post it here for a broader audience. The Model is produced by Modellsport Schweighofer in Austria. (It’s made in China exclusively for Schweighofer from their specifications). It will be available in two colors: Blue/orange and green/orange.

Me on the left, Hanno, and Conny Åquist in Klagenfurt with the new Curare ARF. Photo by Hanno Prettner Jr.

The new ARF is endorsed by Hanno himself, and he has been involved during development. It is based on the MK Curare 60 kit drawings, and modified for ARF construction, and also changed significantly in the nose section to accomodate electric power (It has a detachable cowl and canopy, and a battery tray). The same model can be powered either with glow or electric, parts are included for both.
Schweighofer have built and extensively tested at least three prototypes, and Hanno has flown both glow and electric versions. He has one himself, an electric one that he flies regularly. I have been fortunate enough to visit his field in Austria and testfly his model, and it flies great – it’s not like a 2 meter model, but surprisingly close. It is the ultimate sport and retro F3A model.

Kit contents
The standard size ARF box holds no surprises. Wing halves, fuse, stab halves, rudder, etc, all nicely packaged. It’s when you start to look at the manual that you see how complete it is – there’s hardly any work left to be done by the builder! Noteable prefabricated things are wheel bays in the wings, servo mounts ready (even the covering is removed), every surface is pre-hinged (you just have to add thin CA), the canopy is cut, fitted and painted with the proper trim, the cowling is ready to mount (for electrics – you have to cut an opening for a glow engine), pushrod guides installed, firewall and tank area fully fuelproofed, firewall blind nuts installed -the list goes on. You’ll also notice the intricate trim scheme – it faithfully reproduces the paint scheme of Hannos original Curare in many colors and dozens of stripes and fancy trim. (He had both blue and green versions so both are “correct”). All hardware required to complete the model is included – as well as a tank, and mounts for both glow and electric motors.

The only thing required is a suitable undercarriage. No undercarriage, fixed or otherwise is in the box. Thankfully Schweighofer stocks a suitable electric retract kit of high quality. The model is retract-ready, so that you would have to modify it significantly to fit any fixed gear. The electric retract kit is is complete with a nice 3 – 1 cable, and extension cables are also supplied. Most pilots have an old set of retracts in their parts drawer. You can fit almost any type of mechanical or pneumatic retracts if you wish, and the common Supra mechanical retracts fit without modification.

The undercarriage legs have to be cut to length (specified in the manual). A Dremel disc cutter is prefect for this. 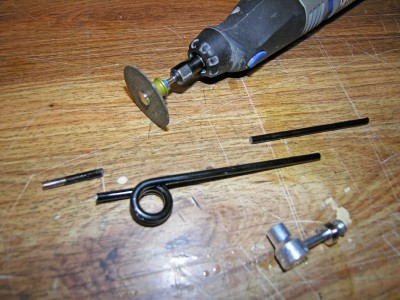 You do not have to file flat spots, as everything is held in place by double set screws.

I opted to build the glow powered version. It is designed around the O.S. .55 AX. You do not need to fit a tuned pipe, but I thought it was right to have one, both for the looks and for the extra power and low noise it provides. Schweighofer does not recommend the use of a bigger engine. The model is far lighter than the original and uses CAD-designed lightweight construction, so you could have CG problems if you fit a 60-size engine. The target weight is 3,1 kg for the glow version.

The build
The instruction manual starts with the joining of the wing. I opted to complete each wing half before joining. I found that easier, as each wing half is easier to handle. The retract simply slot in, just remember to add the extension chord first. When the aileron hinges are glued, servos hooked up, and the retracts are installed, then I joined the wing. The wing joiner is strong, light, and the fit is perfect. 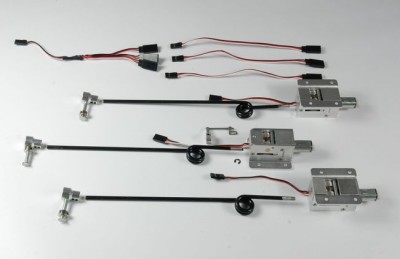 The retract kit from Schweighofer as it is delivered. 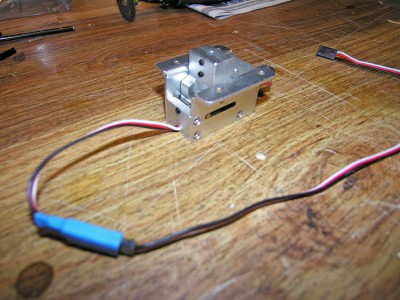 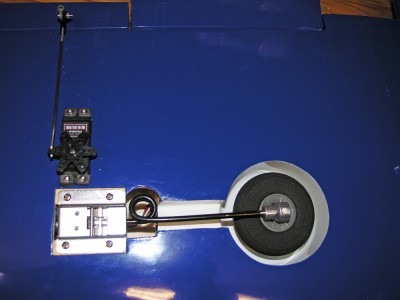 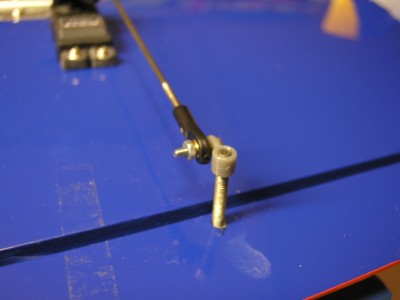 I used a different approach for the ailerons than specified in the manual. While the supplied equipment will do the job adequately, I tend to stay away from plastic links so I used ball links that I had lying around. The supplied aileron and elevator horns are surprisingly good, not unlike MK horns, but through a force of habit (Old habits die hard!) I used my tried method of simply gluing in a 3 mm. threaded rod. I use this method on 2-meter models, and it holds up well. The Curare ailerons are not thick, so I beefed up the wood by saturating it with thin CA, before gluing in the rod with rubber-strengthened thick CA. I have previously used Epoxy, so we’ll see if this holds up. If it proves weak I can always substitute these for the supplied horns. 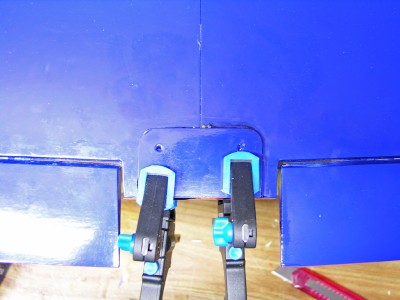 Joining the wings are uneventful – You just glue in the joiner, and then join it with 30 min. Epoxy. After that you add the two forward dowels and the plate shown in the picture. That usually completes the wing on a normal ARF, but the Curare has flaps, and we’ll tackle them next!

Click here for part two, when we install the flaps and nose gear.