The final part of the build is the engine and pipe setup. This is usually time consuming with a lot of alignment, but I found that not to be the case here. One evening, and you’re done!

The firewall and tank area is 100 % ready from the factory, fully fuelproofed. Even the blind nuts for the engine mount is installed. No epoxy has been allowed to ruin the threads either, they have been very carefully covered with tiny pieces of masking tape! 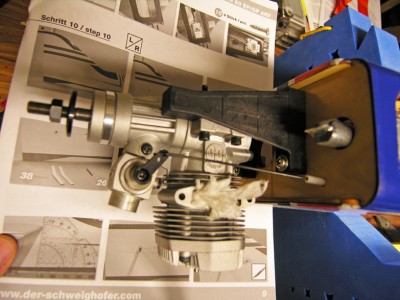 The O.S. .55 AX engine is mounted. (Note the nose gear electric motor protruding through the firewall). Just bolt on the engine mount, and drill holes in it. My only grief here is that I did not find any measurement in the manual regarding distance from firewall to the back of the spinner, so that I could position the engine correctly. Trial-mounting the cowling solves this. By removing the cylinder head (you have to do this later anyway), you can slide the engine in and out with the cowling on to determine the correct position. All hardware for mounting the engine is included, right down to the last washer. The throttle linkage fits in a ready made slot in the tank tray, you just have to drill a hole in the firewall, and the resulting linkage is nice and straight. 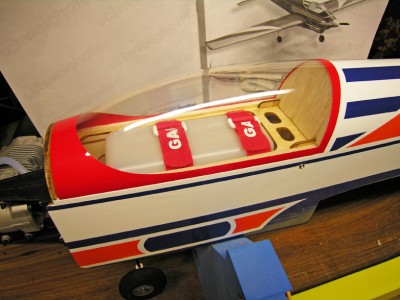 The fuel tank comes next. It is included, it’s decent quality, and it fits like a glove. It’s large, and it needs to be -a piped engine burns a lot of fuel. The tank tray is installed, and has cutouts for straps. These are not included, so I used spare helicopter battery velcro straps. Fit some soft rubber sheet under the tank (to prevent foaming) and strap it in place. 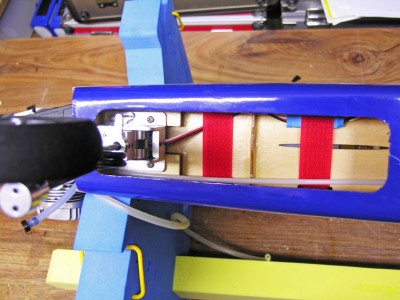 The straps are slung around the nose gear cable to hold it firmly in place.

Tuned pipe
The pipe is next. It turns out you can’t buy a decent header/pipe combo at just any hobby shop these days, so you need a specialty supplier. Many experienced modellers might still have suitable headers and pipes in their drawers. The days when Hatori produced 2-stroke headers for just about every plane in production are over, but you can still get hold of a #400-series 2-stroke pipe in certain places. I opted for the so called Purple Pipe combo made and sold by Just Engines in the UK: 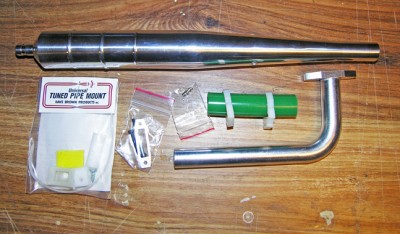 This is the contents of the medium size Purple Pipe Combo, that fits 40-50 size engines. For a very reasonable price you get everything you need with a 1-click purchase. The three-baffle tuned pipe, a header, silicone coupler, straps, pressure tap, screws and a pipe mount. You can choose three different widths for the header. The wide header is the best suited for our Curare. While our engine is a .55, you do not need the big 60-pipe. It will be too large for the plane and too long for the engine. And clever readers will notice that Purple pipes are no longer purple in color… 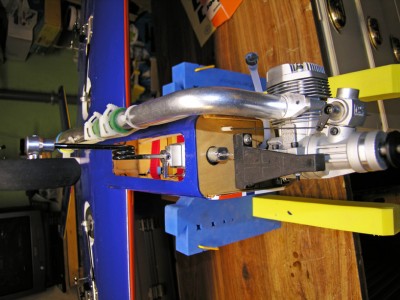 The header is fitted. It clears the nose gear perfectly. I bent it ever so slightly outward by hand (it’s aluminium) to get the radius 100 % correct. 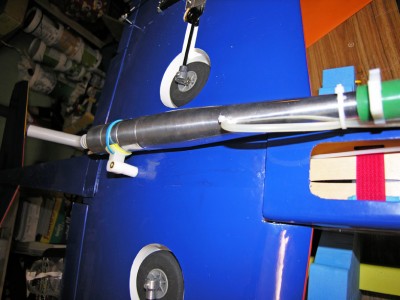 The pipe mount is ready. This is a very simple Dave Brown pipe mount. I shortened it a bit, used the offset mounting option, and it fits beautifully. To secure the mount to the wing, I carefully drilled a hole in the center spar, threaded the hole, saturated it with thin CA, and screwed it in.

Note: Engine trials done after the pictures were taken proved the header to be too long, so I sawed off about 3,5 cm. using a metal saw.

And that’s it! Nothing to it. When the engine and pipe are in, you must Dremel a large opening in the cowling to clear the header, carb, cylinder head and needle valve. It seems brutal to cut out almost a third of the beautifully painted cowl, but when it’s done you can enjoy the sight of the beautiful O.S engine hanging out. It tops off a very nice looking plane.

Weight and equipment used
The ready to fly weight of just 2.93 kg for my model is nothing short of incredible. A decent Curare could weigh in at over 4 kilos in back in the day. The target weight of 3.1 kg is within reach for all builders of this ARF, regardless of equipment used. I built this plane like a would a 2-meter contest model, saving weight whenever possible. For an ARF, that means using glue sparingly, and fitting strong 40-gram digital servos. Using mini servos for flaps and throttle saved further precious grams. I used a Futaba 9650 for the flaps, Futaba S-3151s for ailerons, and Futaba S-3050 and 3172 HV for elevator and rudder respectively. Ideally, I would have used S3050s or even BLS-551’s all over, but I had all these lying around. The electric retracts has an operating voltage of 4,8 – 6 volts, so that excludes the use of HV-equipment. My 2200 mAh NiMH RX battery could be exchanged for a lighter 4-cell 1000 mAh pack, but the CG was spot on with the heavier pack. Higher voltage also means faster servo response and less current draw. 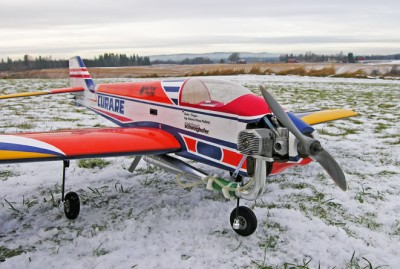 Ready to fly – almost. There’s still all the servo programming to do, and we’ll get to that in part 4 – I’ll show you a few videos of the plane on the workbench, demonstrating undercarriage operation and the different control surface mixing.