This is part 2 of a field and bench review. In part 1, we installed the main gear, ailerons, and joined the wing halves. When the wing halves are joined, we move on to the flaps. The instructions are different for electric and glow power – for electric power, the flap servo is to be installed in the back half of the wing, presumeably to give space inside the finished fuselage for the battery box. For the glow version, you are instructed to put the flap servo where it fits most naturally, in the center of the wing, using the supplied pre-cut servo mount. It fits all std. size servos, but I modified it slightly to fit a Futaba 9650 mini-servo. The flaps are not big, so you do not need a powerful servo, but centering is important. The linkage is built into the wing, and all you have to do is add the two horns, and cut the supplied pushrods to length.

Why the flaps, you might wonder?
At the Las Vegas TOC in 1976, square manoeuvres were flown for the first time and the corners had to be flown sharp, crisp and tight. So Hanno invented a Flap system which operated with the elevator controls and called it Snap-Flaps. It was THE sensation at the TOC and the year after even more Snap- and square manoeuvres had to be flown, and most of the pilots copied Hanno’s Snap-Flaps. If you want to have fun, just couple the Flaps opposite with Elevator and you can draw square figures in the sky. And the stopping for entering into spin is even quicker. For smooth and rolling manoeuvres the flaps are not engaged.

Finished flap linkage. You’ll notice the mass of servo cables extending from the wing. There are five in total… Even if you fit mechanical retracts you will have four wires to plug into the receiver when assembling the model. I decided to spend an hour soldering an MPX 6-pin plug. Two plugs for +/-, and 4 for the different signal wires. (The main gear only needs a single signal). 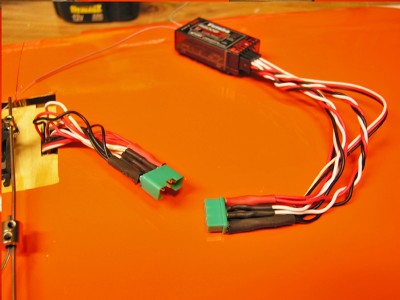 Here’s the finished plug – five wires from the wing to the receiver via one 6-pin plug.

That completes the wing!

The fuselage
First thing to add is the nose gear. This is steerable (optional) and linkages are included. After cutting the nose gear leg to proper lenght (specified in millimetres in the manual) you simply screw it in using the supplied screws. If you want, you can leave it fixed by simply tightening the set screws. I chose not to make it steerable. If needed, you can add this later by simply loosening the set screws and hooking up a pushrod to the rudder servo horn. 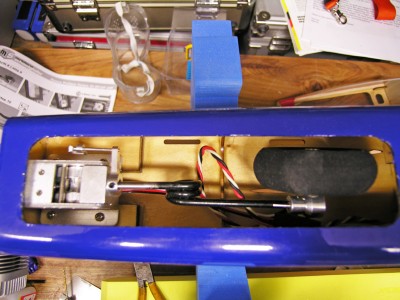 The nose gear is installed. The nose gear and main gear on my plane are plugged into different channel ports in the receiver, and both are set as “Gear” channel with the same switch.

The fin is an integral part of the fuselage. To complete it, simply glue in the pre-hinged rudder.
The stabs have a negative angle, a central part of the curare design. It means they have to be glued to the fuselage separately with a central joiner, and there is much alignment that the builder must pay attention to. On my model, the fit was perfect, so after removing the covering (you attach the stab and draw a pattern around the base rib to see the area to be removed) I was able to glue both halves in one go using 30 min. Epoxy, and the alignment was much easier than I had anticipated. The stabs are fully sheeted, which makes them strong and light, and the whole assembly could be made removeable if cunning modellers would wish to make make such a modification to their Curare. 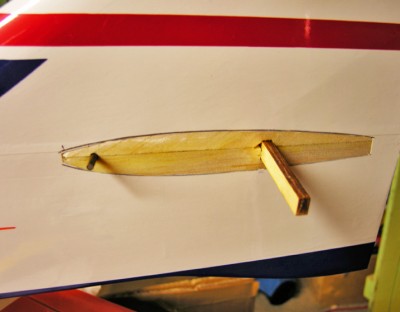 The stab root is traced, covering removed, and one carbon guiding pin and a negative angle plywood joiner glued in place after every measurement is checked. Then the stabs are glued in place with Epoxy.

The elevators are then glued in place with thin CA on the hinges, and you are ready to install the pushrods. Once again I differed slightly from the manual and used threaded rod as control horn, and substituted the plastic clevises for metal ones. The rudder has the supplied horn as you can see in this picture:

The rudder was too thin to use the threaded rod control horn technique.

Pushrod guides are pre-installed in the fuselage, but the supplied 1,5 mm pushrods are not threaded so that you have to solder on threads for the links. While they are supplied with the kit, and of good quality, I would have preferred not to have to solder, as this might be intimidating for inexperienced builders. It’s still an understandable compromise. Threaded 2 mm rods would be heavier.

The servo mount is installed the fuselage, but you have to add two spacers that put one servo higher than the other so the servo horns will not interfere. These spacers are supplied. To connect the two elevator pushrods, you are meant to use the supplied 3 mm wheel collars. I differed from the manual here, since I had a spare coupler lying around. It’s the same principle, but it just looks a bit tidier: 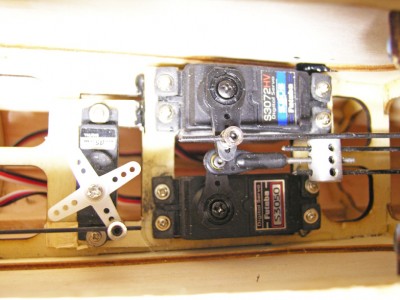 Elevator and rudder servo. The coupler can be seen on the right. I’m sorry I don’t know where I got this lovely specialty item from, but you can use wheel collars (supplied), that will work fine.

I used a metal gear digital mini servo from Schweighofers own brand for the throttle, which brings me to the final part of the assembly – the engine, which we’ll deal with in part 3.