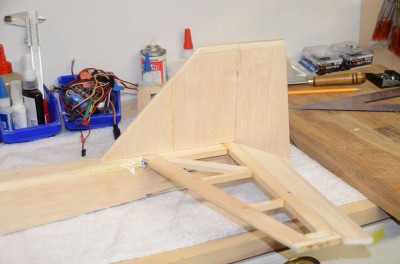 This is part two of the Restomod-project. Check out the new tail (above). I made a new fin and rudder, new elevators and modified the stab tips to make everything nice and uniform. I wanted to get rid of the pointy, tall fin and elevators. It’s not radically different, but a lot cooler. The fin and rudder are almost 2 cm lower, something that will tie in nicely with the overall stance of the plane when it’s done. I have more changes in mind!

This has been a tough decision, but I’ve decided to go with a standard Kaos 40 canopy (The plain Tower Hobbies $3 canopy) instead of the long Killer Kaos canopy. It’ll be a whole new look. I wanted to loose the 1990’s styling, and this just looks a whole lot cooler!

You can see comparisons of the old and new tail, plus how it looks with the old canopy compared to the new one in the builds photo album.