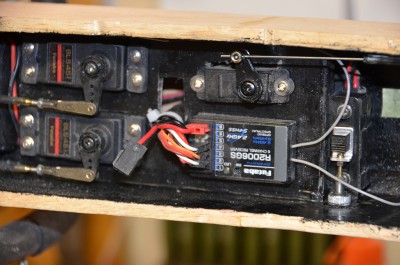 The finished radio bay in the fuselage

My favourite part of any build is the pushrod mechanicals, the electronics and engine installation and so I take my time getting it as perfect as I can. I ground out a huge cutout for the Tettra 400cc tank in the fuselage former. The tank would fit in front in the tank bay, but I wanted it further back in order to not have the CG shift in flight due to the tank being emptied. 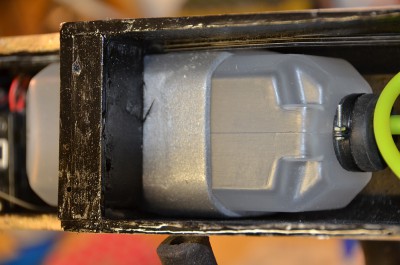 The servos were moved forward from their original position and the battery sits behind them, in order to fix a CG issue that the plane had back in the day. Because of that, the pushrods had to be lengthened. I wanted to stick with the original Carbon Dubro pushrods that were already in there, so I simply added a longer threaded rod that extends a bit into the pushrod inner and outer tubes. It adds a little bit of weight, but it adds it behind the CG where I need that weight, and as a bonus it stiffens everything up a little more. BLS451 servos were bought very cheap from a chopper guy switching to HV gear. They are great servos, so I get them whenever I see them up for sale. The throttleservo is a Dymond metal gear digital midi.

To top everything off, I fuel proofed everything using flat black enamel paint, which also looks cool. I’m very happy with how the interior bits and pieces turned out. 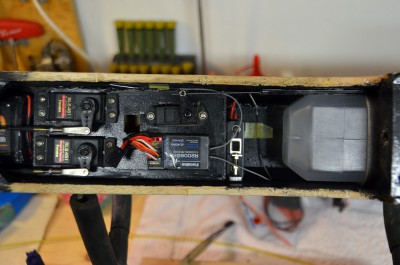 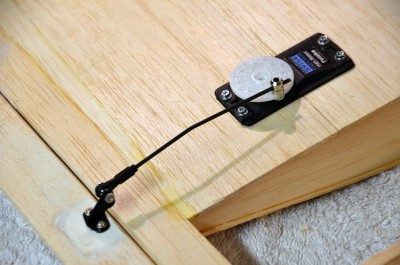 The aileron linkages. I used a pair of trusty old 9154s that have over 400 flights but are still pretty solid. I added plywood inserts to the ailerons so that the screws have something to bite in. I shortened some Futaba servo screws to fit, as I didn’t want anything visible on the upper side of the ailerons. 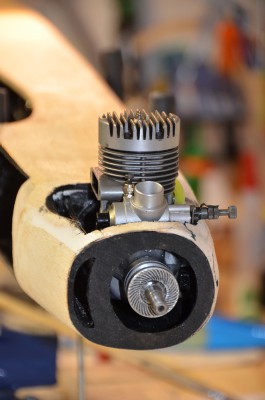 The O.S .61 SF engine was fitted in order to get the throttle linkage hooked up. The intake is finished. It’s a lot of motor for so small a nose.