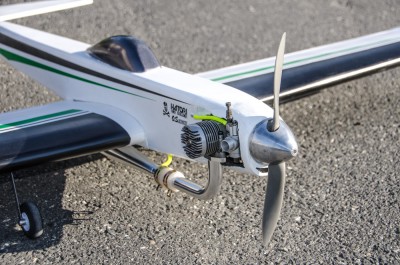 It was one of those incredible warm and sunny august afternoons, with clear blue skies and just a hint of a breeze, and I brought my daughter along and went flying. We were alone at the field when my Killer Kaos crashed spectacularly.

I tuned the engine. At first it was flooded, and that killed the OS #F plug, so I replaced it with an OS #8. At home, I had shortened the pipe by cutting the header a good 2 centimetres. It worked. The engine ran strong, frighteningly so, as I tached it at 11.200 rpm. Glad I ordered bigger props, I thought, as I took off. Immediately it started leaning out, not providing the power the tachometer promised when on the ground, and I landed a minute later. The engine was piping hot, it oozed heat and I scorched my finger touching the head. I was at a loss, and then I remembered:

The engine was bought used, and when I got it, it was full of burned Castor oil. I always use 15% nitro and 15 % Aerosave pure synthetic blend in my engines. Problem is, this engine was brought up on low nitro and Castor oil and it was made in an era long before the AX-series engines I’m used to now. So I switched fuels, draining the tank and putting in 10 % nitro fuel with 18 % synth/Castor blend oil. The difference was amazing.

It screamed. I was able to turn the needle almost one full turn out, and power and smoke just kept coming. Simply unreal. Delighted, I took off into wind, and the Kaos was tooling along the blue skies like a dragster down the strip, a gorgeous white smoke trail in its wake. It just hauled upwards like nothing else mattered, and I got that incredible, indescribable rush of pure joy and I wanted nothing more than to hammer the throttle and roll upwards until the cows came home. Then it blew up.

I knew it was flutter before my brain even processed it. The elevator boomed for a second with such ferocity, it even drowned out the sound of the engine. I startled so that I pulled the throttle back as pure muscle reflex, attempted a turn towards home, and realized only the ailerons worked. It wobbled, stalled and then went in nose first. It only lasted two seconds.

The engine was buried 10 inches in soft soil. The fuselage from the rear wing mount forwards was smashed. The fuel tank, receiver, two servos, battery, everything smashed. One wing half in pieces, another crushed. Incredibly, the header and pipe seem undamaged. But the plane is a total loss.

The elevator fluttered. No doubt about it. There is a gaping hole where the elevator horn was, and the carbon rod broke where the threaded rod was screwed into it. The horn and link is missing. It’s one of the very few planes I’ve had over the years with a single elevator pushrod, and it will be my last.

I’m really sad. I was in heaven, truly enjoying myself and thinking that wow, this is what all those hundreds of hours in the basement is really all about. The sound, the smoke, the goose bumps you get when you pull up and the plane, your creation, just keeps on going. And then nothing but silence and sorrow.

I’m also grateful, now that the shock has passed. Grateful that a lot of expensive parts survived. Grateful that I had those few minutes of pure pleasure in the skies before it was over. Grateful that it landed in a field and did no harm to anyone. Grateful to have had this plane. I always wanted to fly pattern, and this was the first plane I had that didn’t crash. I flew it in its original version for four seasons, and it really taught me to fly pattern. It inspired confidence, and I felt it even today, that my fingers could do nothing wrong with it. It was… solid. A rock.

The only way to relieve my sorrow is to look ahead. My decision was already made as I walked to the crash site: I will build another. It will take a while, as is my custom, but I have already started to plan my next one. I will build it from scratch, I have my original plan, and using bits and pieces of the wreckage as templates I will build a new Killer and fly it like there’s no tomorrow, and as a homage, the new one will carry one single wing rib from the original with it into the skies.

So long my friend.