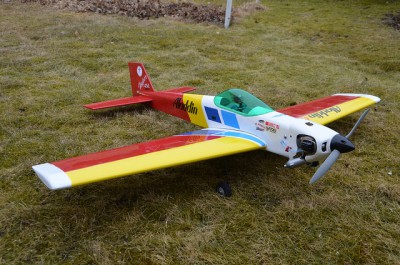 The wonderfully strange Yoshioka Aladdin 45L that I built in the autumn of 2012 has finally flown, after hanging on my wall for almost three years (That’s what family life can do to ones hobby). The first flight was highly successful. After some trimming, it flew hands off straight and level. The engine, an old but well looked after YS .63 FZ ran rich but did not stop. It has ample power, it’s not a rocket, but it pulls it along with enthusiasm. The sight of the sleek plane with the fourstroke sound was very strange. It looks like a pattern plane and sounds like a scale model.

The Aladdin has a very strange feature, an offset engine installation. It is explained in the poorly translated Japanese instructions that mounting the engine like this does not require any right thrust. It looks very odd, and gives the plane its trademark appearance. See here: 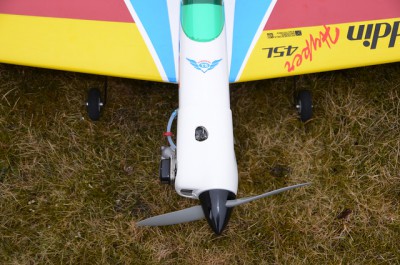 Offset! It’s mounted 90 degrees to the models centreline. The benefit, apart from the obvious fact that the engine and muffler are almost completely buried in the cowling and not hanging out the side, is that right thrust will vary with engine RPM, and this setup will not. I have just the one flight, but I could see no apparent problems in the air, it certainly flew straight enough. Perhaps it really does work? But if so, why haven’t others done the same? Comments?

Here are the build photos.