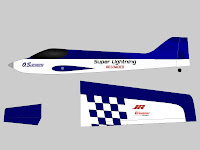 Do you remember the “Super Lightning” made by Flair in the 1980’s? Internal pipe, all balsa/foam construction. I built one when I was 18. It was a wonderfully simple box construction but with lines like a pro molded thouroughbred. I have fond memories of it although it was a jinxed aeroplane – it crashed on the first flight and then I painstakingly rebuilt it, complete with a hardwood rod across the seam where the left wing broke clean off. It lasted one flight and it smacked into the ground due to a radio glitch.

I’ve toyed with the idea of building another ever since. Although the wreck is long gone I still have the plans. I’ve photographed them and drawn a more modern version in photoshop (see picture).
I’m considering enlarging it to fit the O.S 1.20 AX (I need a reason to ge me one of those you see).
That would make it a 1.90 wingspan job. Engine would go in the nose at 90 degrees to allow the stock muffler to hang over the side, sort of like the Blue Angel if you remember that one.

And it would be simplified – sheet stab and rudder, strip ailerons (the original had them) and perhaps a plug in wing for easy transport. I plan on using the removeable pipe cover for radio access since it’s already drawn on the plans.

Pipe dream? You watch. Might take me a year or maybe even ten but the SL-R will fly again, third times a charm and all that!