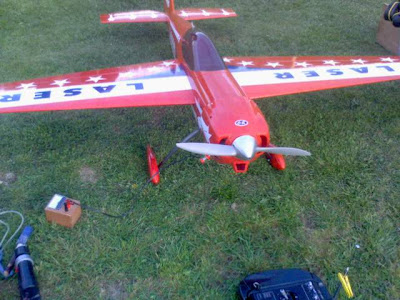 Have you read part 1?

The plane was refuelled and inspected, nothing had come loose, even the wheel pants were no problem on grass. After eagerly waiting for my turn I was very uneventfully airborne once again, pilot not shaking so much this time!

One fellow pilot commented later that it looked as if I was enjoying myself and he was absolutely right, I was having a ball! On this second flight I tried to get to grips with the fact that it was absolutely neutral in all flight attitudes, even inverted required no down elevator. It had some pull towards the belly in knife-edge but not so much that you’d notice in a straight-forward four-pointer or slowroll. I had turned the aileron throws down by 10% after the first flight and I noticed now that the elevator, particularly down-elevator was too sensitive so until next time I’ll turn it down 15% on up and 20% down. I also did some stall turns and it was very smooth. I was surprised that it was so fast going up and I had to wait for a long time before it was ready to turn. Spins are graceful and recovery instant. While I still had fuel to spare I decided to try landing approaches and it was tricky getting used to the light wing loading, it just kept going forever and ever and I had to circle, side-slip and even turn 180 degrees before I was on track. Needless to say I had a high idle because the engine is not broken in and it’s also not often I land planes with 17 inches of disc pulling in front like that. Second time was pretty decent and it landed very softly. Happy does not begin to describe my state of mind, then and now!

To summarize, the plane is so smooth, powerful, capable and easy that all I can think about is when to order the next one (gotta have a b-model…) and what on earth I have been wasting time with all these years flying other models. Sure the Calypso, Saphir and Sky Star are good planes with exceptional abilities but the Laser just tops them all with a margin I had never anticipated. Easy to build, easy to transport, very economical and quiet, quick to assemble and so smooth that you can pour it in a glass and serve as a drink.

Here’s to you Uwe Sommerlad and Wolfgang Lorenz, congratulations on a fine airplane. It will not be my last Laser.