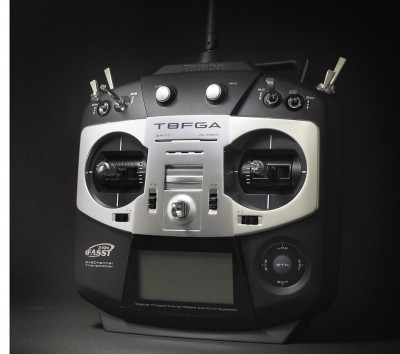 With the switch to YS CDi, I needed to get into 2.4 ghz systems in a hurry to be safe from radio interference with the new ignition system. My trusty old MC-22 is possible to convert, but considering the price tag, the Futaba T8 FGA was simply irresistable. I could get a brand new radio system complete with a very decent 2.4 receiver for the same price a conversion of the MC-22 would have cost. That means I can still use the MC-22 and it’s receivers for older models. Being a handheld radio, the T8 is also a sensible choice for indoor flying.

Another big reason for choosing Futaba is that they have a great range of 2.4 receivers at affordable prices. I could not find another system with more suitable receivers for my need. In addition, Futaba is probably the biggest brand and parts and service is available anywhere in the world.

When buying a new 2.4 radio these days I really wanted a native 2.4 radio, something without interchangeable transmitter modules, empty 35Mhz antenna slots and a bulky WIFI-like anteanna sticking out the back. The T8 is beautiful in that respect, being so simple and elegant and infinitely programmable. The sensor touch control thing is reminiscent of an Ipod’s control pad and very easy to operate. It has so many great features it’s really hard to belive when you compare it to similarly priced systems. It even has the possibility to set five different dual rates/Expo for each channels, assignable switches, everything you’d expect from a modern system. The only negative thing I’ve found so far is that flight modes only work in Glider or Heli mode, NOT in motor plane mode. Pretty silly, but when you think about it, they probably just left that out so that plane pilots have a reason to buy the T12 instead, which is more than double the price of this radio. And who needs flight modes with 5 switchable rates, right?

Here’s the RC Universe review of the radio.