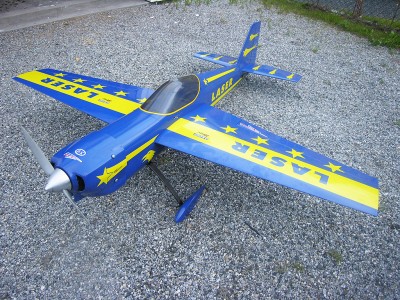 It happened a few weeks ago but I’ve tried not to think to much about it- the Laser crashed and was totally destroyed during practice in rough winds. It was much better but sadly not flown as much as the Red Laser that preceded it. Intended as a backup model I originally fitted it with an O.S 200 FS engine. It was fitted with a pump and Hatori header that was later sold cheap after realising it had none of the power I wanted. I replaced it with a YS 1.60 which I discovered was badly broken before I had a chance to fly it. It then got a used YS 1.70 DZ which performed really well. After changing fuel from one type of Rapicon to another it stopped on takeoff, breaking one undercarriage leg. It took a while to get the leg I wanted from Germany and by the time it got mended, last years flying season was over and I was eagerly looking forward to receiving my new Integral. The Laser was in storage for a full year until my Integral broke and then it came out of hiding, dutifully performing its role as backup model. It flew very nicely and after three trim flights due to a change to 2,4 Ghz it performed well. It was very honest to fly with no bad habits. Although not being able to match the Integral in knife-edge performance it was a very decent F3A model, despite looking like an IMAC half-breed.

There was a lot of wind that fateful day. I don’t really mind wind as long as it blows straight down the field but this was the kind of day when your model must be bolted to the grass in order to not fly away on its own, the kind of windy day only an idiot flies. I was that idiot. After the second round of P11 I was about to turn onto base leg for landing, and with a tailwind best described as a tornado, the idiot move I made was to retard the throttle and pull a little elevator to turn. It stalled, simply flicked forward and was blown nose-first into the dirt in the blink of an eye.

“There he goes. A high-powered mutant of some kind never even considered for mass production. Too weird to live, and too rare to die.”
– From Fear and Loathing in Las Vegas