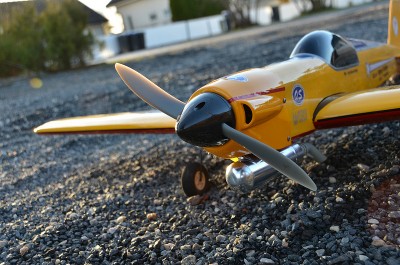 I built an old Supra Fly 25 from the OK model kit in 2002, flew it with an O.S 40 LA, and stored it away when the engine was sold. I came upon a new-in-box O.S 32 SX engine in the summer of 2013, and I put two and two together, literally. What a match! The airframe was still as solid as when it was new after all that time in storage, it just needed a good cleaning. I treated it to some more color on the wings and a dozen stickers to liven it up a bit.

Inside, it got a new CG-mounted fuel tank, a whole lot of stuff removed with the dremel, and new digital servos snugly fitted to a carbon tray. But there was no cowl! I had the old one, but it was A) not original, being taken from a Supra Star, and B) had all the cut outs for the engine and muffler in all the wrong places. I was unsuccessful at moulding a new one and so ordered a Great Planes Escapade 40 cowl. It was too deep and too high but I managed to cut it in half, join it again and shorten it, before repainting it yellow with red trim. It fit perfectly!

An underslung Hatori tuned muffler finished it off nicely, and I look forward to flying my old friend with all new equipment this winter.
This is the way it looked in 2002, and this is what it looks like now.