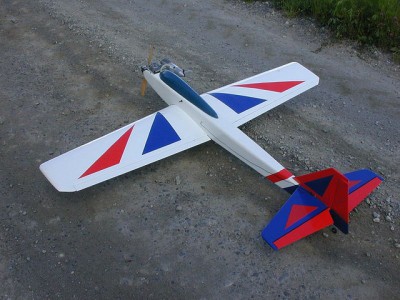 The original back in its day, about 15 years ago. I’m gonna loose the horrible 1990s color scheme and canopy and make it cool again!

I’m a fan of the Kaos series of planes and got a Killer Kaos* kit around 1998. I remember ordering it by e-mail directly from Joe Bridi, and that it was a very impressive kit with all sawn and sanded parts. He gladly offered advice on building and engine choice, although he disapproved of my choice to mount the engine upright. Well guess what Joe, that’s about to change!

I flew this plane a lot for four full summers, and learned a great deal. It was in fact the fist pattern plane that I never crashed. It was a good, solid flier. Eventually the ailerons came loose and I had plans to do a lot of fixes to it that I never got round to, other planes having taken its place as I started competing actively in F3A. It was sold to a friend in 2004.
I came across an O.S 61 SF last year and had no idea what to put it in, so I gave my friend a call, and it turned out he still had the model, preserved exactly the way it was when he got it. I bought it back, and now it’s never gonna be sold again.

So now I have a completely original, unrestored Bridi Kaos. It’s straight, light, well built (I was surprised at old selfs abilities, I didn’t realize I put that much effort into it back then) and it deserves a complete restoration. Also, I have come to realize that the spirit of the Kaos-line requires a bit of modification, so I’m gonna do that Hot-Rod builders call a restomod, which is short for restoration and modification. And I’m gonna have a ball doing it. It’s gonna be fast and not very loud, it’s actually gonna be kinda fast ‘n’ quiet!

My plans for it includes:
– New engine (an O.S 61 SF) and a spanking new Hatori 650 pipe and header
– Completely new covering and color scheme
– Lighter and better digial servos
– Rebuild the nose to mount the engine on its side
– New and different wing tips
– Individual aileron servos

* Some Kaos trivia: The Kaos name was sold to Great Planes in the 80’s when they produced the Trainer 20-60, Kaos 60 and Super Kaos 40-60. After that, Joe Bridi continued to design other versions, but changed the name to Chaos with Ch. Utter Chaos and Killer Chaos to name a few. I never got used to that and so I still call all planes in the series Kaos with a K. Designed by pattern Legend Joe Bridi, the Kaos appeared in RCM magazine in 1970 and the streamlined long-nose Super Kaos with retracts came in 1973 in RCM magazine. That’s a looong time ago and it’s still cool! After Great Planes started kitting the Kaos, Don Anderson created the legendary Ultra Sport which is essentially a Kaos with a turtledeck.